A new LED Lamp and the Evolution of Yaquina Head Lightsources 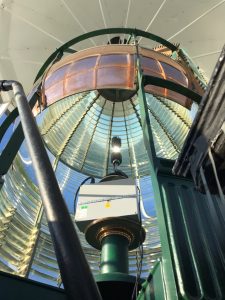 *Notes on the LED Light: There are a few major advantages to this light over the previous systems. First, the old bulbs had a 2,000 hour expected life, which meant they would have to be replaced every 2.5-3 months. Due to unavailability, the T-20 BP bulbs were replaced by a newer model in early 2018, which were considerably cheaper but burning out so quickly that techs had to come up from Coos Bay almost every month to replace them. The LED fixture requires no regular maintenance, and the LEDs are good for 10-15 years. Even if one of the LEDs fails for some reason, the remainder will stay illuminated. Additionally, the LEDs are much more efficient than the incandescent and halogen bulbs used in the past. There will be a power savings of approximately 70%.

Help To Uncover the Secrets of the Past, Find a Shipwreck of Your Own! 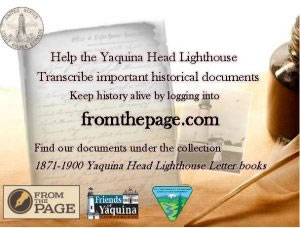 We have historic letters, logs, and inspectors reports that need to be transcribed! Help to reveal the unknown history of the Lighthouse! Just recently a volunteer found an account of not one, but two maritime disasters. The above is an example of the beginning of the St. Charles disaster at sea, following is a link to the story of the St. Charles along with a gruesome Newspaper article from Sacramento regarding the events https://www.newspapers.com/newspage/42197300/

Surely there are more buried in our logs, to find your own just Transcribe them here!

To aid in the restoration and preservation of Yaquina Bay and Yaquina Head Lighthouses and surrounding areas, and to interpret their natural and cultural histories.