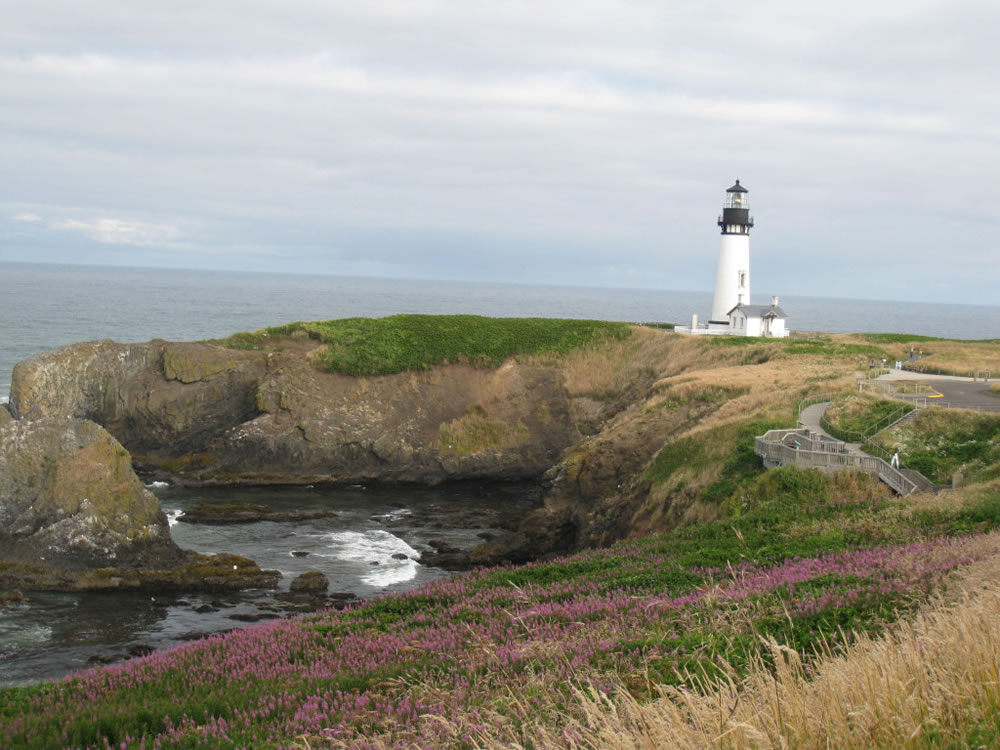 Have you ever climbed the stairs of a lighthouse?  Viewed a working Fresnel lens? Have you explored a tidepool, or watched as thousands of seabirds joined together in one of the biggest nesting colonies on the West coast? And oh yes, can you spot those whales?

We invite you to visit the Yaquina Head Lighthouse, where all of these experiences await you.  You might tour this historic structure, or you might just stand and savor the sight of Oregon’s tallest lighthouse framed by the majesty that is the Central Oregon coast.

The 93 foot tower is located on a narrow point of land jutting due west nearly 1 mile into the Pacific Ocean north of Newport, at Yaquina Head Outstanding Natural Area. Winds and rain have buffeted this lighthouse since its beginning in 1872, and it took approximately one year, and over 370,000 bricks to construct.

The light has been active since Head Keeper Fayette Crosby walked up the 114 steps, to light the wicks on the evening of August 20, 1873. At that time the oil burning fixed white light was displayed from sunset to sunrise. Today, the fully automated first order Fresnel lens runs on commercial power and flashes its unique pattern of 2 seconds on, 2 seconds off, 2 seconds on, 14 seconds off, 24 hours a day. The oil burning wicks have been replaced with an LED stack (36 individual LED bulbs).

In addition, Yaquina Head Outstanding Natural Area is home to one of the West coast’s largest nesting colonies of Common Murre’s. Also frequently spotted are Brandt’s and Pelagic Cormorants, Pigeon Guillemots, Western Gulls, Black Oystercatchers and Bald Eagles.  Yaquina Head is also home to its very own mated pair of Peregrine Falcons, visible most days on the cliffs above the Interpretive Center.

Yaquina Head is also on the migration path of the Gray Whale, and they can be spotted quite easily in December and January as they migrate south to warmer waters in order to breed and give birth, and in March and April as they head to their feeding grounds up north in the Bering Sea.

Cobble Beach tidepools, named for the smooth, dark, rounded stones that cover the beach, offer some of the best tidepool exploration in the area.  BLM staff and volunteers are always on hand to offer safety guidelines, natural history information, and a general willingness to help ensure that you, the visitor, have a great experience.

Check the weather in advance of your visit at:

To aid in the restoration and preservation of Yaquina Bay and Yaquina Head Lighthouses and surrounding areas, and to interpret their natural and cultural histories.